We tend to struggle with getting our veggies in during the winter. When snow is falling and it’s just about freezing, the last thing we want to eat is cold lettuce. We were brainstorming ways to make winter salads and dreamt up this Green Bean Cobb Salad. Everything we love about a traditional cobb salad (hello, toppings!) but on top of green beans instead of iceberg lettuce. The result is refreshing but still hearty and something we are down to eat any time of year. We paired the salad with our favorite Sunday Night Salad Dressing, which adds a little bit of a vinegar punch to the richer ingredients like bacon and feta. 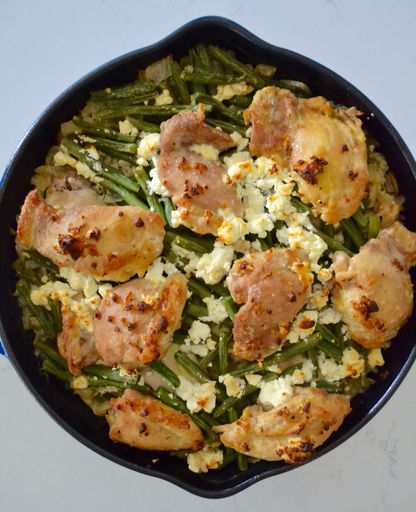 As we have mentioned in previous posts, we love our local Middle Eastern grocery store, Arash. They have some of the best quality lamb, chicken and traditional Middle Eastern ingredients that we can find in the area. When we go we always buy a giant block of French feta, which is less salty and creamier than the feta you can find at a regular grocery store. We created this dish chicken and green beans dish as a quick, one pan dinner and have since made it a number of times. The feta melts into the white wine and creates the most delicious sauce for the chicken and green beans. We can have dinner on the table in less than 30 minutes which is always a major win on a weeknight.

We have implemented a “Steak Saturday” tradition during quarantine. We like to fancy it up a bit on the weekends and celebrate our Tuck & Tate “move in” quarantine anniversary each Saturday – we are approaching week 8 together! We try to mix up our side dishes and this week experimented with Miso Green Beans. We love the unctuousness of this side dish. The miso and soy sauce give the green beans a rich, salty delicious flavor and when cooked down, make the green beans sticky and finger licking good. We have perfected the reverse sear method for cooking our steak. For details, see our Instagram highlight here! 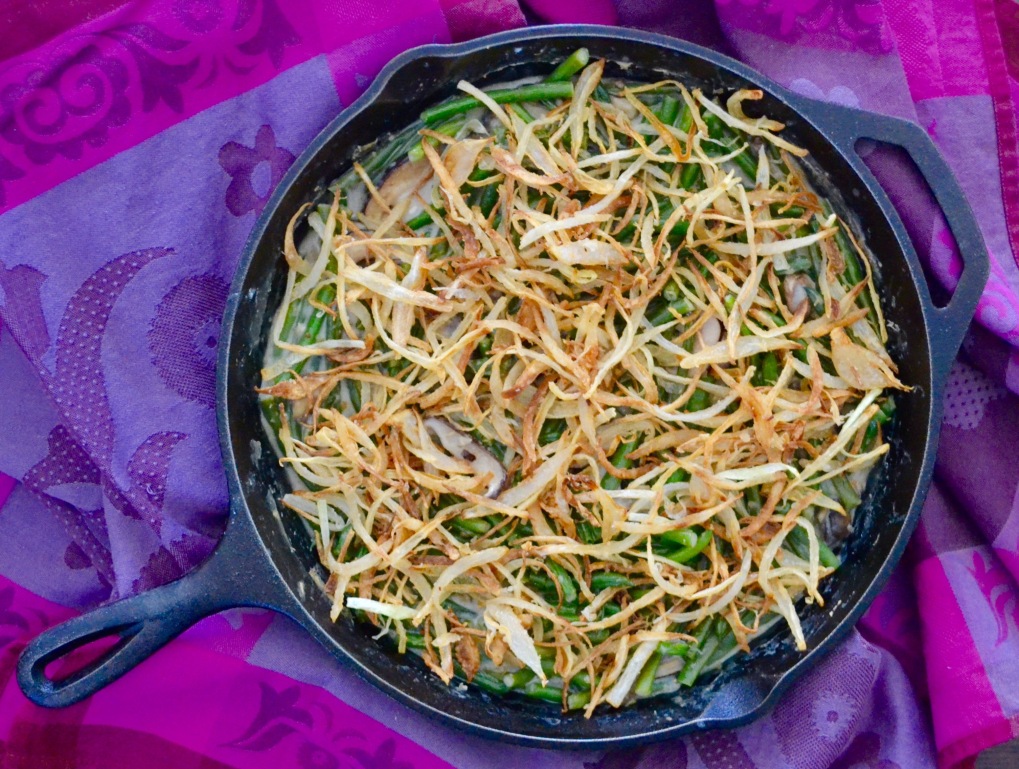 This dish has a bit of a history with Tuck’s mom and dad. Tuck’s mom had just finished culinary school and was admittedly a bit of a food snob at the time. It was going to be her first Thanksgiving with Tuck’s dad (this was before Tuck and before marriage) and he insisted on having Green Bean Casserole because it was his favorite. Tuck’s mom gasped in horror that after a year in culinary school something that was mostly made of canned foods was going to end up at the table on her favorite holiday. Was this incredibly snobby? Yes. But she stood her ground because she’s a Taurus. Instead of continuing to bash the infamous Green Bean Casserole, she embraced it as a challenge and cooked it herself. Every year since, she has been responsible for making it for Thanksgiving and has tweaked it to become its very best version of the original classic. At Tuck & Tate, Thanksgiving dinner means a turkey is being fried somewhere. If you celebrate in a similar manner, throw the onions in the fryer after you have finished the turkey. It will save you extra dirty pans and means you can throw them over top at the last second for the ultimate crunchy treat.

Ingredients For The Casserole:

Ingredients For The Fried Onions:

**This fried onion step can be done ahead of time if you need to knock a few things out earlier in the day. If you do this, add the onions to the top of the cast iron pan with 3-5 minutes left in the cooking time to reheat and get crunchy again.